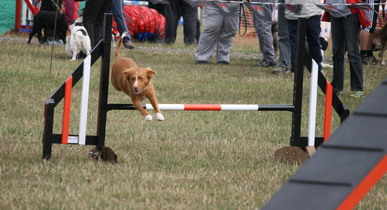 Storm was our second Toller and was a fantastic ambassador for the breed. She was been headstrong at times, but would willingly have a go at anything asked of her. She went out beating but due to her enthusiasm for chasing prey didn't go out for a while, when she matured and had a more 'steady' nature she occasionally went on a 'walked up' shoot where she just had a ball, doing what she has been bred to do. She has been shown and did reasonably well but eventually she decided that it wasn't fun any more so has been withdrawn from the show scene.

Storm was a registered PAT dog and like Pepper is proved to be a great success with the people she visited.

Storm wass been awarded her Bronze agility warrant (May 2012), her Silver warrant (July 2012) and her Gold Warrant (September 2016) and moved to Grade 7 in Kennel Club Agility. Due to her age she retired from Agility and took up Rally where she did reasonably well when we got to competitions.

Storm enjoyed her retirement, but sadly she had a stroke which, whilst she seemed to recover for a while, caused her more damage than we realised and she left two weeks later when she could no longer stand up as her legs had failed. She is sorely missed.

Here is a picture of some of Storm's trophies 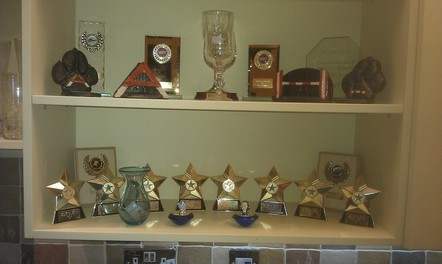 All her agility results can be found here

Winning into Grade 2 in 2010 at Heart of Wales, Grade 3 in 2010 at BHC, Grade 4 in 2012 at Dordale spring show and, Grade 5 at Dordale summer show in the same year, then her final win to achieve Grade 7 was at Adams Easter show in 2017. She retired from agility after the Kennel Club international Festival that where she collected a lovely amount of rosettes for her 1st and 2nd places. What a girl and what a career 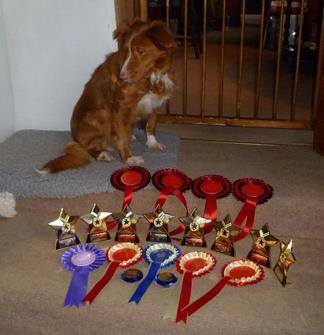 Her Rally results can be found here